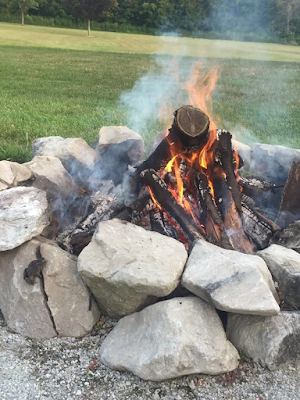 If you look at the picture above, you'll probably be drawn to the flaming logs. But if you look on one of the rocks on the bottom left, you'll see a little critter. A frog.


That little frog jumped out from the fire pit rocks about fifteen minutes after we had started the bonfire. Apparently, we had disturbed its nap. If he was a smart little frog, he would have hopped far away. But no. He was not a smart frog.


When my son got up off of his chair to have a closer look, the stupid frog hopped back onto the rock, where you see him in the picture. He was heading for danger.


"Bubba," I said. "You're going to have to get away from the frog, or it's going to hop right into the fire."


As soon as Bubba said that, the brainless amphibian hopped even closer.


"He's going to jump in!" my daughter shrieked.


It took a while, but the frog finally decided that being so close to the fire was not a good idea. It hopped off the hot rock into the nearby wood pile.


I think it needs to find a new home, or next time it's not going to be so lucky! 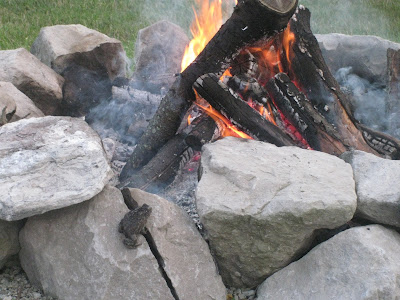 The deer in my neighborhood are fearless. They walk up and down our streets and yards in the middle of the afternoon, not caring who or what sees them. Just the other day, I saw a herd of deer grazing in our neighbor's front yard while a tabby cat sat in the grass two feet away from them. They didn't care. This insolence drives our hundred pound German Shepherd, Schultz,  crazy. He's stuck in the house, barking his head off at them. Most other dogs in the neighborhood do the same thing. They want to chase the oversized rodents, but can't.


Well, one little dog in our neighborhood had his big chance. Somehow, he escaped from the confines of his house. He charged, looking like a ferocious little beast. I have to admit that he made an impressive amount of noise. The deer weren't impressed.  They looked at the little fur ball and turned the tables. They charged at him!


The scared little dog stopped yapping and ran for his life!


It was the craziest sight to see - a herd of deer chasing a little dog!


(I have a half a mind to send Schultz after them. They're afraid of him. When he comes out, they run! We need to teach those bullies a lesson.)
Posted by Sherry Ellis at 11:51 AM 54 comments:

The Wrong Side of the Mountain

I've been doing a lot of exploring with my kids, which is why I haven't been sitting in front of my computer blogging. Yesterday's adventure involved a mountain.


I took my kids and one of their friends to Yonah Mountain in Georgia. It was supposed to be a lovely two and a half mile hike to the summit. Well, it ended up being a little bit longer for us. After climbing about an hour and a half, we reached the half-way point. We thought it was the top because the view was so pretty. But it wasn't. Other intrepid climbers informed us that the summit was at least a half hour hike further up.


We gathered our things and continued upward, over some pretty rough terrain. This wasn't your average dirt trail. We're talking climbing over very large boulders and fallen trees. About fifteen minutes later, we met some other hikers coming down.


"How much further to the summit?" I asked.


"About twenty minutes," they replied. "There will be a fork in the road. Go left. It's a wider trail and easier. Then you'll come to a clearing. Take the trail on the left, rather than the one on the right."


We found the fork and went left. A little while later, we noticed the trail was heading down, and not up.


"Something is wrong," I said.


"Maybe it'll go down and then back up," my daughter's friend said.


It didn't. It went down, down, down. Until we came to a sign. "Road Closed." We looked at each other.


"Check the GPS and see where we are in relation to the parking lot," I said.


We were eleven miles away on the other side of the mountain. Not good.


"Okay, everybody. We're climbing back up!"


And that's what we did. We climbed that stinking mountain twice. What should have been about a two and a half hour hike ended up being over five hours.


My daughter and I decided to find the summit, which we did. I'm glad we did, because the view was beautiful. But the moral of the story is, if you're climbing to the top of a mountain, always follow the path that goes up. And bring a map.


Here's the view from the top: 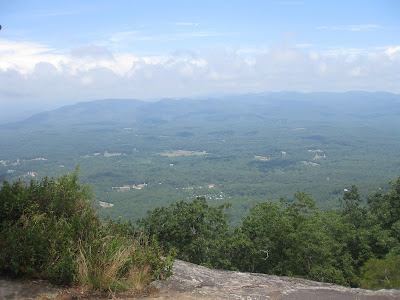 Question of the Month and Stretchy Socks 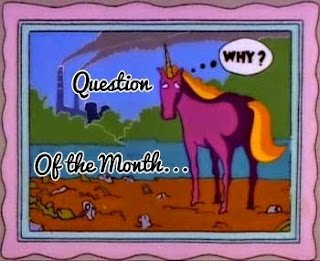 It's time once again for the Question of the Month hosted by Michael D'Agostino. This month's question is:  What was the first book/series that you fell in love with?


The first book was James and the Giant Peach by Roald Dahl. My teacher read it to our class in the second grade just before lunch. She read a chapter a day. I couldn't wait for the next day so I could hear another chapter! As far as a series goes, I really liked the Nancy Drew series. I think I have every book in the series. (That's a lot of books!)


Do you have a favorite first book/series?


"Mom," my twelve-year-old son said as he came down the stairs. "I can still fit into my baby socks!"


I couldn't believe it. "Are you sure about that?"


He pointed at his feet. "These are the ones I wore when I was two years old."


I looked down at them and squinted. "Are you sure?" They looked vaguely familiar, but I wasn't sure they were actually his baby socks.


"Yeah." He took them off and showed me. They looked slightly misshapen. Like they'd been stretched about five times their original size.  "I've been working at it, and I can fit into them, again!"


Apparently those were his favorite socks. Guess they'll be around a few more years.


To all of my American friends, I'd like to wish you a happy Fourth of July!
Posted by Sherry Ellis at 3:48 PM 21 comments: