Stuck in a Tree

First, I'd like to thank my awesome friend, Tara Tyler, for the shout out on her blog. You rock, Tara!

My fourteen-year-old son thought it was a good idea to climb the maple tree in the front yard. He wasn't happy getting to the middle of the tree. Oh, no. He had to go as high as possible.

"You know, cats get stuck doing things like that," I shouted up.

After he had spent about five minutes swaying in the breeze up there, he decided it was time to come down. Except he had a little trouble.

"I'm stuck," he admitted after several attempts to find a descent route.

I analyzed the situation. "If you shimmy down like a fireman's pole, you can probably get your foot into the next fork."

Apparently, that suggestion was too terrifying. "You need to get the ladder, Mom,"

I sighed then fetched the step ladder and brought it out. It wasn't nearly tall enough.

"Get the painter's ladder."

Let me tell you how heavy the painter's ladder is. I can barely lift the thing. And I'm pretty strong for a middle-aged woman. Anyway, I dragged the darn thing out, and then spent the next five minutes trying to figure out how to open it up and brace it against the tree. I got it opened, but bracing it safely against the tree for him to get down was not possible.

"Dude, I don't know what to say. You're either going to have to figure this out, or we're going to call the fire department."

He tried the shimmy thing. But his foot got caught on a smaller branch. He put his weight on it and promptly snapped it off.  It was a terrifying slide down to the before-mentioned fork.

Somehow, he managed to get out of that tree. But not without some scratches, bumps, and pain to his man-parts.

I think he learned his lesson.
Posted by Sherry Ellis at 10:17 AM 30 comments: 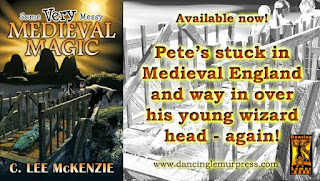 Before I begin, I want to take a moment to help spread the word about my author friend, C. Lee McKenzie's new book, Some Very Messy Medieval Magic. She lost her husband two days after the book was released, and hasn't been able to market it. So, I'm giving her a hand. I would have included a review, but I'm still in the middle of reading it. I can tell you that I'm enjoying it and that it's well-written! I'm sure she'd appreciate a few sales!

Here's the scoop on the book:


SOME VERY MESSY MEDIEVAL MAGIC
By C. Lee McKenzie
Pete’s stuck in medieval England!
Pete and his friend Weasel thought they’d closed the Time Lock. But a young page from medieval times, Peter of Bramwell, goes missing. His absence during a critical moment will forever alter history unless he’s found.
There’s only one solution - fledgling wizard Pete must take the page’s place. Accompanied by Weasel and Fanon, Pete’s alligator familiar, they travel to 1173 England.
But what if the page remains lost - will Pete know what to do when the critical moment arrives? Toss in a grumpy Fanon, the duke’s curious niece, a talking horse, and the Circle of Stones and Pete realizes he’s in over his young wizard head yet again...
Release date – May 15, 2018
Juvenile Fiction - Fantasy & Magic/Boys & Men
$13.95 Print ISBN 9781939844460
$3.99 EBook ISBN 9781939844477
C. Lee McKenzie has a background in Linguistics and Inter-Cultural Communication, but these days her greatest passion is writing for young readers. When she’s not writing she’s hiking or traveling or practicing yoga or asking a lot questions about things she still doesn’t understand. http://cleemckenziebooks.com
Links:
Barnes & Noble
KoKobo
iTunes
Amazon
Kindle
Foyles
Goodreads

The other day, I was doing some gardening. I bought a bag of "organic" soil. As I poured it in the container, some spilled out. My nosy German Shepherd, Schultz, had to see what was going on. He sniffed the dirt and decided it smelled so good, he had to eat it.

"Schultz!" I hollered. "Cut it out!" I wasn't sure if eating dirt would make him sick, but I didn't want to risk it.

He trotted off and I cleaned up the dirt before he could eat more.

A little while later, the dog was standing next to the container where I had planted the flowers in the organic soil. Do you know what he was doing? Eating the dirt!

I had never seen him eat dirt, so there must've been something extra special about organic soil. Makes me wonder what's in it!

Scaring Away the Ghosts

My kids are convinced our house is haunted. I have to admit, sometimes I wonder. We've had shutters open by themselves, loud knocking on doors when nobody is around, and a sense of seeing something out of the corner of our eyes when nothing is there.

My daughter decided to do something about it. The other day she came home with this: 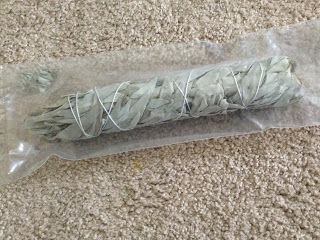 "What the heck is that?" I asked. I was concerned it might be some kind of drug.

"And what exactly are you going to do with it?"

"Burn it. Sage gets rid of ghosts."

So, the girl lit an end of it on fire and walked around the house, letting the smoke fill the air.

Let me tell you, that thing stunk!

I couldn't believe how bad it smelled after her little ritual.

"Well," I said. "I don't think anything is going to live here now. Including us!"

(I'm happy to report that we haven't had any more strange occurrences. So maybe it worked.)

Do you believe in ghosts? Do you think sage gets rid of them?
Posted by Sherry Ellis at 1:27 PM 41 comments:

A Spoonful of Sugar

Before I begin this post, I want to take the time to thank all of you for being here and being so supportive. I'm always amazed by how many of you visit the blogs where I am a guest and leave such thoughtful comments. You're awesome and I appreciate every one of you!

The other day, I decided to make chocolate chip cookies. The recipe I have makes four dozen. I didn't want four dozen. So I split the recipe. Everything went fine until I came to the sugar part. For some reason, my brain turned off and I dumped in the amount of brown sugar and white sugar the recipe called for, which ended up being about two cups: twice the amount I should've put in.

Fortunately, I realized my mistake before it was completely mixed into the batter. I tried to scoop out half of the sugar, but inevitably, there was more sugar than there should've been.

When they were done, they looked slightly different. The extra sugar gave them a shiny glaze. Hmmm, I thought. I wonder if they're edible.

I tried one. It was actually good.

My kids smelled the cookies and ran into the kitchen to get some.

They thought they were good, too.

"Mom these are the best cookies you've ever made!" my daughter said.

Isn't it funny how sometimes a mistake ends up improving something? Have you ever unintentionally messed something up to discover that your mistake improved it?
Posted by Sherry Ellis at 9:35 AM 37 comments: