Fingerprints on the Ceiling

The other day, I happened to glance up at the ceiling. I noticed some smudge marks. I got a stool and stood on it for a closer look. Do you know what they were? Fingerprints.

There was only one individual who could be the culprit.

"Dude. How did your fingerprints get on the ceiling?"

"Well," he said rubbing his chin. "I jumped because I wanted to see if I could touch the ceiling."

"Uh, huh," I said. "Obviously you could. Now, how do you think those prints are going to come off?"

I explained it to him. "You see this stool, right here? The one short people like me have to use to touch the ceiling?"

"You stand on it and you scrub them off."

The boy got a rag and water and scrubbed his grimy fingerprints off. Hopefully that will be the last time he'll have to do that. Now that he's grown much taller than me, I'm going to have to do regular ceiling inspections just to make sure!

The Little Engine That Could

Well, that's exactly what was going on with my little blue car as we climbed the mountains of Kentucky and Tennessee.

This past weekend, I took a trip with my kids to Ohio to visit my dad. We drove. Going there was no problem. (It's a 14 hour drive.) Coming home? Well, that was another story. As we got into the mountains of northern Kentucky, my engine light went on. Something was wrong. I didn't get too bent out of shape over it because I thought it might've had something to do with needing an oil change. But then the car started knocking and bucking and stuttering...right when we were going up a steep mountain. I thought for sure it was going to stall right there in the middle of the mountain.

"What's going on?" my daughter asked, her voice rising a few pitches.

"I don't know," I said, navigating to the far right lane. "The engine light is on."

"Is the car going to blow up?"

"I'll do my best to not have that happen."

When the trouble started, we were 5 1/2 hours from our home in Atlanta. I struggled trying to decide if I should find a mechanic in Kentucky or try to get closer to home. I opted for the latter.

We crawled through the mountains, barely faster than 40 miles per hour. First through Kentucky, then Tennessee, and then over some smaller ones in Georgia.  Even the giant semi-trucks flew past us. And of course it rained on top of it. It was the most harrowing ride ever!

Endnote:  The car is getting repaired now. Something short-circuited in the engine and caused it to not allow enough oil into it. It was in complete "limp mode." It should be better shortly.

The Best Time to Set Up a Zipline

Teenagers do the strangest things.

So, the other night, my boy was out with his buddies in the woods. You might wonder what he was doing, because most teenage boys who are out in the woods at 10:00 PM are usually up to no good.

My boy was setting up a zipline–across Johns Creek. We're not talking a tiny rivulet of water. We're talking a significant body of water. When it's rainy season, the water comes up over eight feet high. People have drowned in Johns Creek. (For those who like geography, Johns Creek is a tributary of the Chattahoochee River.)

So, my boy and his friends decided it would be a good idea to string this zipline they had bought at a garage sale for $5.00 (manufacture date: 1972) across the creek in the dark. There are three ways to cross the creek:  Over the bridge (recommended way), through the water (not comfortable, and not recommended during rainy season) or over a very large tree which conveniently fell and formed a bridge to the other side. The boys opted for the latter. I have crossed this log a few times, and let me tell you, you need a really good sense of balance to do it. I can't even imagine crossing this thing in the dark. But somehow the boys did it, zipline in tow.

They secured the zipline so that it went from a tree on one side of the bank to a tree on the other side. After they were done, they tested it. It worked. They had a grand time flying over Johns Creek in the dark.

The next day, I inspected their work. It seemed secure, but there was no way I was ever going to test it. My boy had no trouble, though. I watched as he zipped over the creek.

"Dude," I said. "Why couldn't you do this during daylight hours? Why did you do it in the dark?"

"Because we're adrenaline junkies. It's more of a rush to do it when you can't see what you're doing."

Uh. Okay. I guess they're right about teenagers' brains not being fully developed!

I'm back from my vacation in Florida. It was a girl trip–me, my daughter, and her friend. We had a great time, except for one thing:  The sliding bathroom door in our hotel room.

I don't know what was wrong with it, but it wouldn't slide. At least not easily. I was able to open and close it, but not without bracing myself, or using every muscle in my body to do it. And I'm strong. My daughter couldn't get it. Not once.

"I'm stuck!" she'd call from inside. And either me or her friend would have to rescue her. It was ridiculous. But I will give it one thing:  It was the most memorable door ever!

Have you ever had to struggle with a door when you were on vacation?

Here are some pictures of the beach at Fort Walton, Florida: 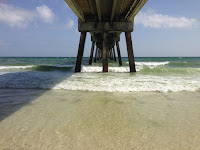 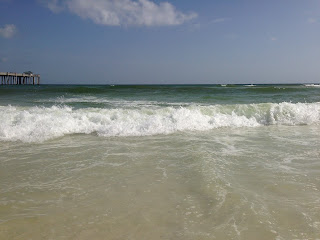 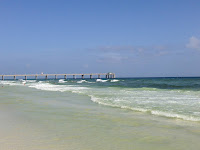 Hope you've all been enjoying your summer!