(Those things go together, don't they?)

Hey everybody, I'm back!  My family and I had a great time at Delray Beach, Florida celebrating our Aunt's 90th birthday.  I have a ton of stories from this trip.  I'll share some of them this week.  But first, I have to announce the winners of Kamy's books:  Crystal Collier is the winner of Breathe Again, and Medeia Sharif is the winner of Family Ties.  Congratulations ladies, and thanks to everyone who stopped by and commented!

Uh oh, I thought.  That thing looked an awful lot like a shark.

"Because there's a sea creature out there, and I don't know what it is."

Meanwhile, other swimmers spotted it and quickly headed for the shore.  We all watched as it came closer.  A fin came up, followed by a tail.  That thing was huge!

We all stood there, watching it for about ten minutes.  Then an intrepid group of folks with a raft decided to paddle out and investigate.

I started humming the Jaws tune.

"I don't know, Bubba, but those guys are nuts!"

The rafters came within five feet of the creature.

"It's a manatee!" they shouted.  Then they took another look.  "There are two of them!"

Great.  So then everyone, including my kids, swam out to see the manatees.

I was  a little more cautious.  Because where there are manatees, there are sharks.  I kept a wary eye on the waves, making sure no other suspicious fins popped out of the water.

Fortunately, under my watch, there were no more sea creatures.  But when we were at the pool later in the evening, there were a bunch of people  talking about a nine foot shark they had just seen.  I bet that shark was hunting manatees!


Now for the game:

It's like "Where's Waldo?"  but this is "Where's Sherry, Bubba, and Squirt (my daughter)?"

See if you can find us in this picture: 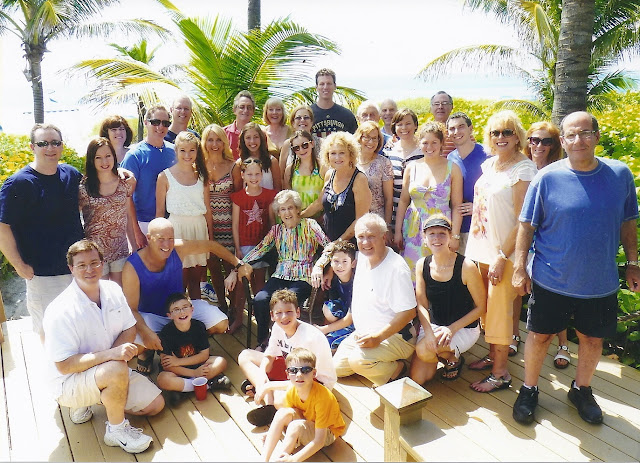 (I enlarged the picture to help you see it.  Hint:  I'm not the dude in the blue shirt who got cut off.)
Posted by Sherry Ellis at 3:49 PM