This story might be a little disturbing for some readers. You've been warned.

Yesterday, my son's science class participated in some dissections. The creatures viewed were an octopus, a squid, and a shark. The octopus and squid were pretty much what you'd expect - blobs of goop. But the shark had a surprise inside:  six babies.

"It had what inside?" I asked, completely appalled that they would kill a pregnant shark for this observation.

"Six babies," he repeated. "They were in little sacs."

This made me sick. "What did you do with them?"

"Nothing. My friend wanted to take them home, but the teacher wouldn't let him."

At least they didn't dissect them.

Is it just me, or do any of you find it appalling that a pregnant creature would be used in a dissection class?


Now on a completely different note, Rita commented on my last post that she would have liked to have seen a picture of me dressed as Cleopatra. So here you go, Rita - just for you! (The young lady is one of my piano students. We had a Halloween recital, and we all dressed up.) 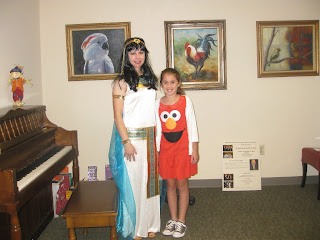