Winners of Giveaway and Krakens are Real!

Thanks to everyone who stopped by for the Trick-or-Treat giveaway!  I was just going to give away two books, but I decided to give away a whole bunch of them, because you guys are so awesome.

The winners are:  Michelle Willms, C. Lee Mckenzie, Crystal Collier, DMS, and Christine Raines.  I'll be contacting you shortly, to let you know and get mailing information.

"Mama," my ten-year-old son said.  "Did you know Krakens are real?"

I looked at that kid and shook my head.  "Krakens are not real.  Those are creatures from mythology."

"They're real," he insisted.  "I read about them in a book.  They live in the deepest part of the ocean.  Let me show you."  He grabbed a book about monsters and showed me a picture. 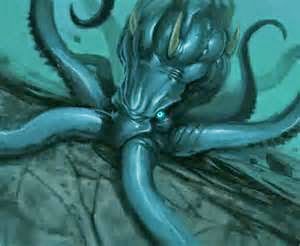 "Dude," I said.  "You can't believe everything you read in a book."

He ignored my comment.  "And do you know what else?"

"They used to be, but now they're extinct," I said.

"No, they're not.  It said on the Discovery Channel that a couple were recently spotted."

Of course I didn't believe him, so he made me watch a video.

Well.  Those were certainly some big sharks!

(For those worried about Krakens and Megalodons in our oceans, I did a little more research.  It turns out there was a disclaimer on the Discovery Channel special that said the footage was fictitious.  There are no Megalodons in our ocean.  The jury is still out regarding the Krakens.)
Posted by Sherry Ellis at 2:45 PM