My kids and I went on vacation to Tennessee. We ended up going through a very secluded area in the mountains where road signs were pretty much non-existent. When situations like that arise, I rely on my Garmin. That's not always a good idea. Garmins are easily confused.

When my Garmin insisted that I go down a dead-end road, I knew we were lost. So what did I do? What any other female would do:  I asked for directions.  Except the only person I found was an old dude standing next to his John Deere tractor on the side of the road.

He studied me for two seconds, and then started talking in his Tennessee drawl. "Well, it ain't down that way. That there is a dead end road."

"Maybe I can take you for a motorcycle ride."

"Uh, no thanks. I just want to get to my destination."

After a lot of listening to him talk about left turns and right turns and fourth traffic lights, I decided the dude with the tractor was not the best person to get directions from. I thanked him for his time.

"If you want that motorcycle ride, just let me know," he said as I pulled away.

(Meanwhile, in the back seat of my car, my kids were listening to the whole thing. "Mom," my daughter said after we had gotten away from that guy. "That was dangerous! You shouldn't talk to strangers!" She might have a point!)


Now, for those of you who like pictures, here's a picture of one of the places I visited:  Burgess Falls. 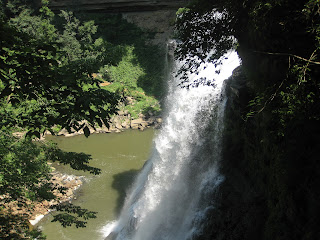