If you recall, there is a thief in my apartment. One that likes bananas. Whenever I leave bananas on the counter, said thief chews the peel off and devours the fruit. I wondered if the thief was a mouse, a roach, or a lizard.

I went with the mouse assumption. The activity I heard going on in the wall also supported this conclusion.  Ready to do battle, I armed myself with an assortment of mouse traps. I wanted to be humane and catch and release the little bugger far from my pad so it wouldn't bother me or my bananas ever again. I put in the peanut butter and set the traps everywhere, figuring the smell of peanut butter would be too much for the little critter to resist.  I safely hid the bananas in the refrigerator while this operation was in place.

For at least 2 weeks, I waited. Nothing. Not even a sound in the wall. Maybe the creature invaded another, more well-stocked apartment. I decided to bring out my bananas because I was tired of dealing with browning, cold bananas. Yellow, room-temperature ones are much better. I left out all the traps, just in case.

Guess what? The very first night, the banana thief struck again. And the traps which were around the bananas were untouched. What the heck? So, ladies and gentlemen, I am either dealing with a very street-smart mouse who doesn't like Jif creamy peanut butter and only eats bananas, or I'm dealing with a rat who's too big for the traps. Or maybe a mini-monkey or other such alien.

What do you think? Should I get rat traps and put bananas in them?

Before I go, I'd like to let you know that I am a guest on the IWSG anthology blog talking about my short story, Ghosts of Pompeii, which is part of the Voyagers anthology which is coming out in May. If you'd like to read the story behind the story, go here. 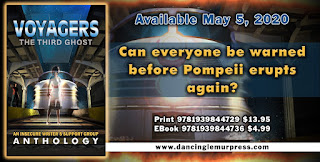