Before I begin my story, I want to let you know about the release of a new book by a very talented writer and blog friend, Medeia Sharif.  You can find it here on Amazon.

Beautiful, confident Tabby Karim has plans for the winter: nab a role in her school’s dramatic production, make the new boy Michael hers, and keep bigoted Heather—with her relentless Ay-rab comments—at bay. When a teacher’s lie and her father’s hastiness rob her of her beautiful hair, her dreams are dashed. The fastest barber in Miami Beach has made her look practically bald. 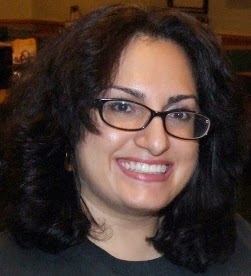 With all her pretty hair gone, Tabby doesn’t believe she fits the feminine role she’s auditioning for. Michael is still interested in her, but he’s playing it cool. Heather has taken to bullying her online, which is easier to do with Tabby’s ugly haircut. Tabby spearheads Operation Revenge, which proves satisfying until all of her problems deepen.
After messing up, she sets to make things right.

Author Bio
I’m a Kurdish-American author who was born in New York City, and I presently call Miami my home. I received my master’s degree in psychology from Florida Atlantic University. After becoming a voracious reader in high school and a relentless writer dabbling in many genres in college, I found my niche writing for young people. Today I'm a MG and YA writer published through various presses. In addition to being a writer, I'm a middle school English teacher. My memberships include Mensa, ALAN, and SCBWI.

When our German Shepherd, Schultz, was a puppy, he got into a lot of trouble!  He destroyed the ignition switch on our grill, not once, not twice, but three times!  (Don't ask me how.)  He chewed through the screen on our back sliding door twice.  He destroyed two garden hoses, chewed up the legs of four kitchen chairs, and decimated my rose garden. He was a naughty puppy!

One day, about three years ago, I was in the kitchen, when I heard a strange sound.  It was coming from the living room.  I went to investigate.  I couldn't believe what I saw!  That gosh-darn German Shepherd had the shoulder strap of my violin case in his mouth, and was dragging the case across the floor.  My violin, of course, was inside!

He didn't want to drop it.

He knew the Mama was mad!  He dropped it, stuck his tail between his legs, and got out of there.

I locked him in there, where he stayed for several hours.  That was the last time he ever messed with any of my instruments, because he knows that if he even so much thinks about eating my violin for lunch, this Mama will turn into an angry lion!