Mister Miner and Winners of the Giveaway

Thanks to everyone who visited and left comments on my last blog post! The winners of my book, That Mama is a Grouch, are Tracy Terry and Barbara in Caneyland.  Congratulations, ladies!

Now for the story. My ten-year-old son has always been fascinated with rocks and minerals. He considers himself somewhat of an expert. So when one of my friends, who is also a rock hound, invited him to go on a crystal dig, he couldn't resist.

We drove to a location about two hours from our home, near the border of Georgia and Alabama. After pulling down a dirt road and driving in a field, we found the perfect spot. (At least that's what my rock hound friend said.) We got out the picks and shovels and started digging. And digging. And digging.

We finally hit a patch that made a scraping sound when we dug against it.

I looked into the red pit and raised my eyebrows. It just looked like a bunch of Georgia clay to me. I shrugged and got down on my hands and knees to pick through the dirt.

Two seconds later, my son came up with a nicely formed prism. "Look, Mama! This has to be worth at least a hundred dollars!"

I shook my head. "I don't think so, Bubba. But keep digging. Maybe you'll find something that is."

More digging revealed even more crystals. By the time we were done, we had filled two cloth bags.

He frowned. "Where can we mine diamonds?"

For those who like pictures, here's some of our stash.  (We're still trying to get the red clay off of the crystals.) 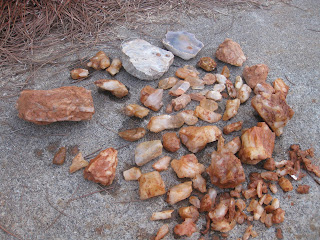