I walked into my son's room and found about a half a dozen paper airplanes lying on the floor. I called him into the room. "What's up with this?" I asked.

"I was making paper airplanes," he said.

That was pretty obvious.

"I wanted to make the perfect paper airplane."

I shrugged. "Give me some paper and I'll try."

He did, and I made one of the models from The Dangerous Book for Boys. "There you go," I said.

He flew it. "Pretty good, but not perfect."

"Then you'd better ask your dad. If anyone can make a perfect paper airplane, it's him."

So he went to my husband.

An hour later, he came back with a huge grin on his face. "Watch this," he said. He tossed the plane into the air. Honestly, I have never seen a paper airplane fly so far and straight.

I inspected it. The thing had flaps cut out, paperclips attached, and the most intricate looking nose. It was an engineering marvel.

My son took it outside and showed his friends. They were amazed at how far that thing flew down the street.

I think my husband has a future in aeronautical engineering!

Here's a picture of the thing for those of you wanting to know what it looks like: 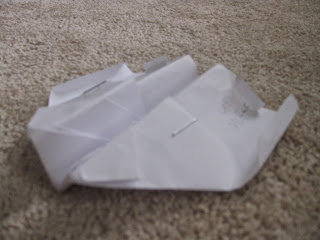