I like to hike. So does my son, Bubba. We often find ourselves in some rather interesting situations when we take a wrong turn, or the path abruptly ends. The last adventure involved a hike to see the Papermill ruins of Marietta, Georgia. I saw the hike listed in the local newspaper under fun outdoor things to do. It sounded interesting. So, I told Bubba, and he agreed to come. This was about 3:30 in the afternoon. Usually we don't go out that late, but I thought we'd be able to complete it in plenty of time before the sun went down.

When we got to the trail head, I looked at the map. The thing had numbers of points of interest. It also had some paths marked with solid lines and others marked with dotted lines. There was no legend to say what all these things represented.

Bubba shrugged. "Let's just follow everybody else. They're probably going to the ruins."

We did. But they weren't going to the ruins. About a mile in, I looked at another map. "Okay," I said. "We were here," I pointed to a number. "Now we're here." I pointed to another number. "We want to go here." Where we wanted to go was definitely not the direction we we headed.

"What does that mean?" Bubba asked.

"It means that if we keep going on this path, we're going to end up in Timbuktu. We'll be at least five miles away from the ruins."

When we came to another map, I looked at it. We had been on a solid-line path. This path was for bikers and hikers. (That's a whole story to itself.) The dotted lines, I ascertained, were for hikers only. I discovered that there was a footpath that led up to where we wanted to go. A shortcut.

"We're taking this path," I announced. I looked at the sky. The sun was getting lower. I only hoped we'd make it to our destination.

We climbed up steep hills and trekked along deep ravines. Coming across other maps, I knew we were going in the right direction.

Then we had a problem.  This was the problem: 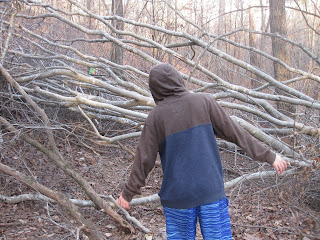 A giant tree had fallen across our path. It had even crashed into the map sign, destroying it.

That's when the off-roading started. We found the river and climbed along its banks. It was precarious, but I figured the mill should be situated next to the river. We'd find it eventually. Sure enough, we did.

At first we saw this: 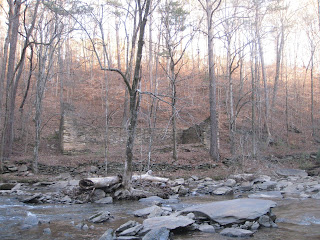 And the we saw this: 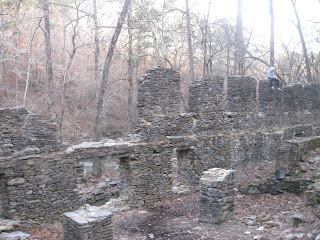 We had reached our destination!

(Going back was another story. It included paths closed for "revegetation." Somehow we managed to get back to our car before it was completely dark!)

And one more thing:  Here is the cover reveal for my picture book, Don't Feed the Elephant! 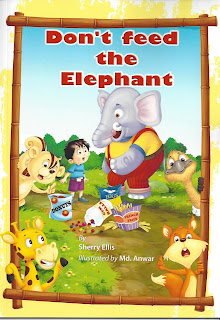