Cover Reveal and Playing Soccer with the Boys 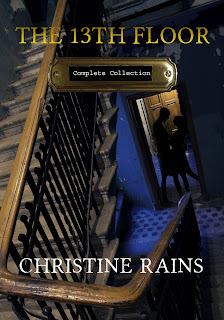 First order of business today is the big cover reveal for my blog friend, Christine Rains. Doesn't it look great?  It's the complete collection of her 13th Floor Series.  I've read several of these, and they're awesome!  Here's a blurb about all the stories that are in it:


Living in a haunted apartment building


On a floor that doesn't exist.


A retired demon acquires a price on his head.


A werewolf is hunted by her pack.


A harpy challenges Zeus for the soul of the man she loves.


A vampire is obsessed with a young woman he can't find.


A banshee falls in love with someone who's death she has seen in a vision.


And a sweet ghost must battle a primal monster to save them all.

All the stories take place at the same time intertwining their lives together on the 13th Floor.


Now for my story:

Last night, my son and I went outside to play a little soccer.  That was all fine and dandy.  But then our giant German Shepherd came out.

He charged at the ball and grabbed it in his huge mouth.

"Schultz, drop it!" I yelled.  I could just imagine what his sharp teeth would do!

He ran off and plopped down under a tree.  He dropped the ball and watched us.  Drool dripped out of his mouth, down his big pink tongue, on to the ball.

I went over and grabbed the ball.  I kicked it to the other side of the yard.

The cat decided it would be a good time to get involved.  He emerged from his hiding spot and took off after the ball.  (I really didn't know that cat could move so fast!)

Schultz got excited when he saw the cat, so he got up and chased him.

My son got excited when he saw the dog and cat, and chased both of them.

I got excited when I saw nobody had the ball. So I chased the ball and scored a goal.

And that's how we play soccer at my pad.