I took my daughter to see the new One Direction movie, This is Us.  In case you don't know who One Direction is, they are a boy band from the UK.  A very popular one!

As we walked in the theater, there were giddy tween and teen girls everywhere.  I knew this was going to be quite an experience.  We found a seat and waited for the show to begin.  When it did, the theater erupted in high-pitched shrieks.

"But it's One Direction!" she answered.

The movie pretty much covered their entire world tour and gave snippets of their shows.  After each song, the teen girls in the theater went nuts.  It was like they were actually at a live concert.

Now don't get me wrong, I enjoyed the crazy atmosphere in the theater.  But somebody should've warned me that I should've brought earplugs!  A hundred screaming girls in a theater is definitely not good for one's ears! 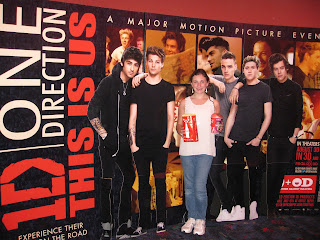 Doesn't she look thrilled?  Too bad the boys aren't real!