To celebrate author, Christine Rain's, debut of her paranormal novella, Fearless, we're having a blogfest to talk about those scary monsters who invaded our homes when we were kids.  As you might guess, there are plenty of monsters in Christine's new book.  Her protagonist, Abby White, kills monsters from children's imaginations (pretty fearless, huh?).  Can she and her stuffed hippo, Tawa, save the world from the monster uprising?  Well, you'll just have to read it to find out. 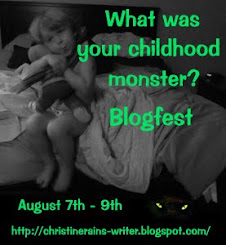 Now without further ado, I'm going to tell you about the very bad monster from my childhood.  I was about four years old.   My bedroom was on the west side of the house, which meant I got the evening sun shining through my window.  This wasn't so bad, except for in the summer, when I had to go to bed at 7:00 PM.  That was when the scary monster came out.

Every evening, after my mother tucked me in, the monster appeared on my wall.  It was a huge shadow thing, in the shape of the bogey man.  Terrified, I'd close my eyes and crawl further under my blankets, praying it wouldn't get me.  As the minutes passed, I'd venture out from under my covers and sneak another peak.  There it was, again!  But it had moved.  It was now on the ceiling, coming closer.  Under the covers I went, afraid to move.

The room darkened as the minutes turned into hours. Every time I looked, the monster was closer, until it was finally above me.  By then it was almost dark. I curled myself into a fetal postion under my covers, and didn't move for the rest of the night.

I honestly don't even know how I managed to sleep with the threat of the monster looming over me.  But in the morning, the monster was gone.  As I crawled out from under the covers, I breathed a sigh of relief that I had survived the night.

So what about you?  Did you have any childhood monsters?

And be sure to check out Christine's new book (and all the other bloggers who signed up to do the blogfest)!
Posted by Sherry Ellis at 8:55 AM