Did I Notice Your Book Blogfest 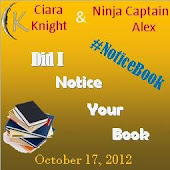 Ninja Captain, Alex Cavanaugh, and Ciara Knight came up with a really cool idea:  inundate the blogosphere with awesome books, and then see if we can get the authors to notice that we promoted their books.

What book did I notice?  The Carousel Ghost, by Andrea Pelleschi.

When I saw the title, I knew I had to read it!  I'm like a little kid, and I love riding carousels.  So if you add a ghost to it, that's even better!

Here's the book description from Amazon:

Fourteen-year-old Kate's traditional first day at Wildwood Lake Park couldn't get any worse. Besides problems with her best friend and the obnoxious, but cute, boy from school named Tommy, there's the new haunted carousel ride. When Kate goes for a spin, she finds herself transported back in time and into the body of a ghost named Isabelle, circa 1928. Isabelle's husband carved the horse, and the rumor is that he also murdered Isabelle.


Back in the present, Kate teams up with Tommy to solve the mystery of how Isabelle died, even if it means more terrifying rides on the carousel. As the investigation goes on, Kate finds herself growing closer to Isabelle than she is with Meghan. So when the carousel is slated to be dismantled for the park museum, Kate hurries to solve the mystery before Isabelle is doomed to wander the park--and Kate's dreams--forever.

Rumor has it that the carousel at Wildwood Lake Park is haunted by Isabelle, the murdered wife of the man who made the carousel horses. When fourteen-year-old Kate takes a ride on the carousel "war horse," she finds herself transported into the body of Isabelle and taken back to the year 1928. There, she discovers the truth of what really happened.

Carousel Ghost is an intriguing mystery which will compel readers to keep "turning the pages" to learn about the ghost and find out what really happened to her. There's also a sweet side story of a friendship between Kate and a cute boy named Tommy. The book is well-written with believable characters and a well-paced plot. It's a perfect read for kids ages ten and up.


Doesn't that sound like a good read?  You have to check it out!

Now to go and see if I can make her notice.  Wish me luck!